A lot of us are privileged enough to never worry about having our basic needs met. For less-fortunate individuals, however, they often have to prioritise purchases and put items we take for granted like exercise books lower on their to-buy list.

But amid all the hardship some Malaysians go through, there are some kind souls who always restore our faith in humanity – such as this teacher who decided to get new notebooks for a student in his class, as her widowed mother couldn’t afford to buy them for her.

Urges other teachers to be considerate too

On 22nd March 2022, Malaysian teacher Cikgu Asraf took to Facebook to share the story of a student who did not bring any notebooks to his class and how he helped her after finding out the real situation.

The student’s identity has been kept anonymous, but Cikgu Asraf wrote that the student had lost her dad and is now living with her single mother who sells ulam for a living. Due to their family’s dire financial constraints, the girl wasn’t able to get notebooks for her classes. Knowing the financial situation of the family, Cikgu Asraf decided to buy a set of new notebooks for the student and gave them to her when the class was over. Delighted by the offering, the student thanked Cikgu Asraf with a big smile on her face.

Towards the end of the post, Cikgu Asraf also urged fellow teachers to not simply label students as lazy or problematic if they did not bring notebooks to classes.

He explained that this could be due to the financial crisis that the student’s family is facing, and that teachers should always try to understand the situation at hand before judging them.

This wasn’t the first time that the teacher had reached out to help his students. Last month in February, he shared how he bought food for a student who came into class with her stomach growling, and now habitually brings food with him to class.

Malaysians can be seen leaving positive comments praising Cikgu Asraf for his kind gesture and thanking him for helping the student.

Some even asked for the student’s details to extend donations of their own.

Poverty is an ongoing issue in Malaysia, and those born into it have little alternatives readily available to get out of it. While those affected may be hesitant to reach out because of the persistent stigma they face in their communities, kind-hearted souls like Cikgu Asraf remind us to always look out for our neighbours, especially those who are in less privileged situations.

So let’s do our part to help our fellow Malaysians in need. Penang Man Frustrated With Stray Supermarket Trolleys Returns Them, Collects RM7 Within 10 Minutes
31 Things To Do In & Around Kuching, From Breathtaking Caves To Malaysia’s Biggest Museum 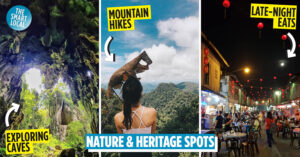