Just two months ago, Rapid KL, a Malaysian public transport system made national headlines for the infamous train collision at Kuala Lumpur City Centre that resulted in over 200 people getting injured. Unfortunately, it’s tough luck again for Rapid KL which has come under fire once again for an incident capturing train doors that remained open during operations.

The incident took place on 26th July 2021 around 3PM, and was captured in an 8-second video that showed train doors of the LRT Kelana Line remaining open as it was travelling. The video is now being circulated on social media.

Netizen @perksofbeingsxf, who goes by the name Sofeana, originally posted the video on her Twitter reacting to the incident while boarding the train. Speaking to The Smart Local Malaysia, Sofeana said that it happened on a train that departed from the LRT Ara Damansara station towards the LRT Lembah Subang station at the said time.

“The doors were closed after everyone got on board the train at Ara Damansara station like normal, but they suddenly opened in the middle of the ride about 30 seconds after the train started moving. It lasted the whole ride from Ara Damansara until Lembah Subang. Then when we reached the Lembah Subang station, the doors closed,” she added.

Luckily, the train was not carrying a lot of passengers and the few who were on the train during the incident were sitting throughout the journey.

The short video has since gone viral on Twitter racking up over 20,000 retweets and 28,000 likes. Netizens reacted to the video saying that it could have been particularly dangerous if there were kids on the train at that time and if they were running around. 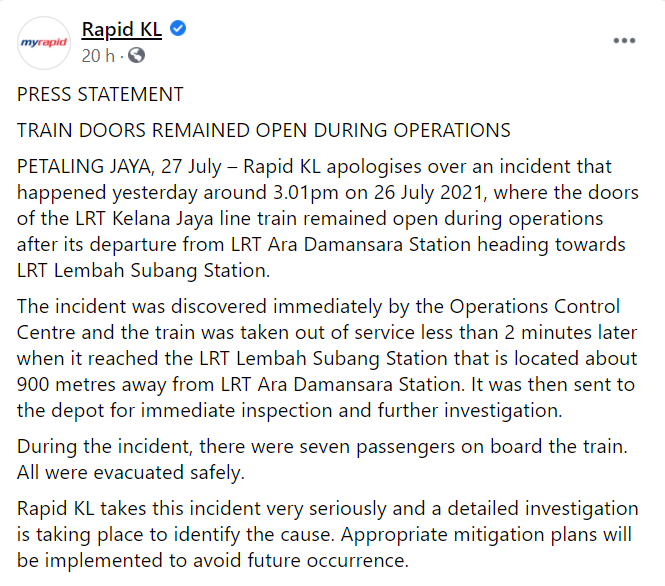 Following the viral incident, Rapid KL issued a formal apology clarifying the matter on their Facebook page yesterday, 27th July 2021. They, too, mentioned that the incident took place when the train in question departed from the LRT Ara Damansara station towards the LRT Lembah Subang station.

“The incident was discovered immediately by the Operations Control Centre and the train was taken out of service less than 2 minutes later when it reached the LRT Lembah Subang Station,” they wrote, adding that the train was then sent to the depot for immediate inspection and that the seven passengers who were on the train during the incident were also safely evacuated.

However, according to Sofeana, when the passengers got off the train at Lembah Subang, the Rapid KL staff who went in to check the train did not check on the passengers’ condition nor there were any announcements made when the train reached the final station before being directed to the depot.

Rapid KL confirms that they are currently conducting a thorough investigation of the mishap and “mitigation plans will be implemented to avoid future occurrence”.

Though RapidKL has responded to the issue, we do hope that such mishaps can be avoided at all costs in the future as open train doors during operations can be extremely dangerous, especially if there are children in the trains, or if there are crowds. In meantime, we advise all Malaysians to always be extra careful when using public transport. 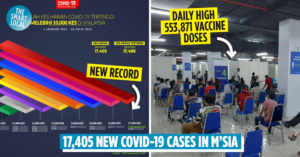 17,405 New Covid-19 Cases In M’sia On 28th July, Breaking Previous Record High By 360 Cases
Man Scared Of Needles Goes Viral On TikTok For Getting Help From Friends To Get... 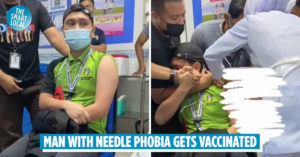