Food delivery services such as Foodpanda and GrabFood were more of a luxury than a norm when they first started. It wasn’t until the COVID-19 pandemic that forced us to stay at home that these services become a fixture in our lives. Because of these companies’ ubiquity, the plight of their delivery riders has become a heavily discussed topic online.

Now, their salaries are becoming another hot topic, as a photo showing a Foodpanda delivery rider’s earnings has gone viral online. The photo showed that the rider earned a whopping total of RM18,004.04 in just 2 months. While impressive, other delivery riders and netizens alike have come out to share just how difficult the work actually is, explaining that it really isn’t easy money.

A photo showing the hard-earned salary of an unnamed Foodpanda delivery rider was shared on several social media platforms by netizens shocked by the numbers shown in it. Facebook user Safwan Seth, for one, posted it to his account, where it has garnered over 6,000 shares at the time of writing.

The photo detailed out the hours worked and orders completed by the rider, as well as his salary of RM18,004.04 that he’d earned in just 2 months. To put this into perspective, that’s an average of RM9,000 a month, more than 3 times the average monthly salary of fresh graduates in Malaysia back in 2019 that was reported at RM2,300/month. 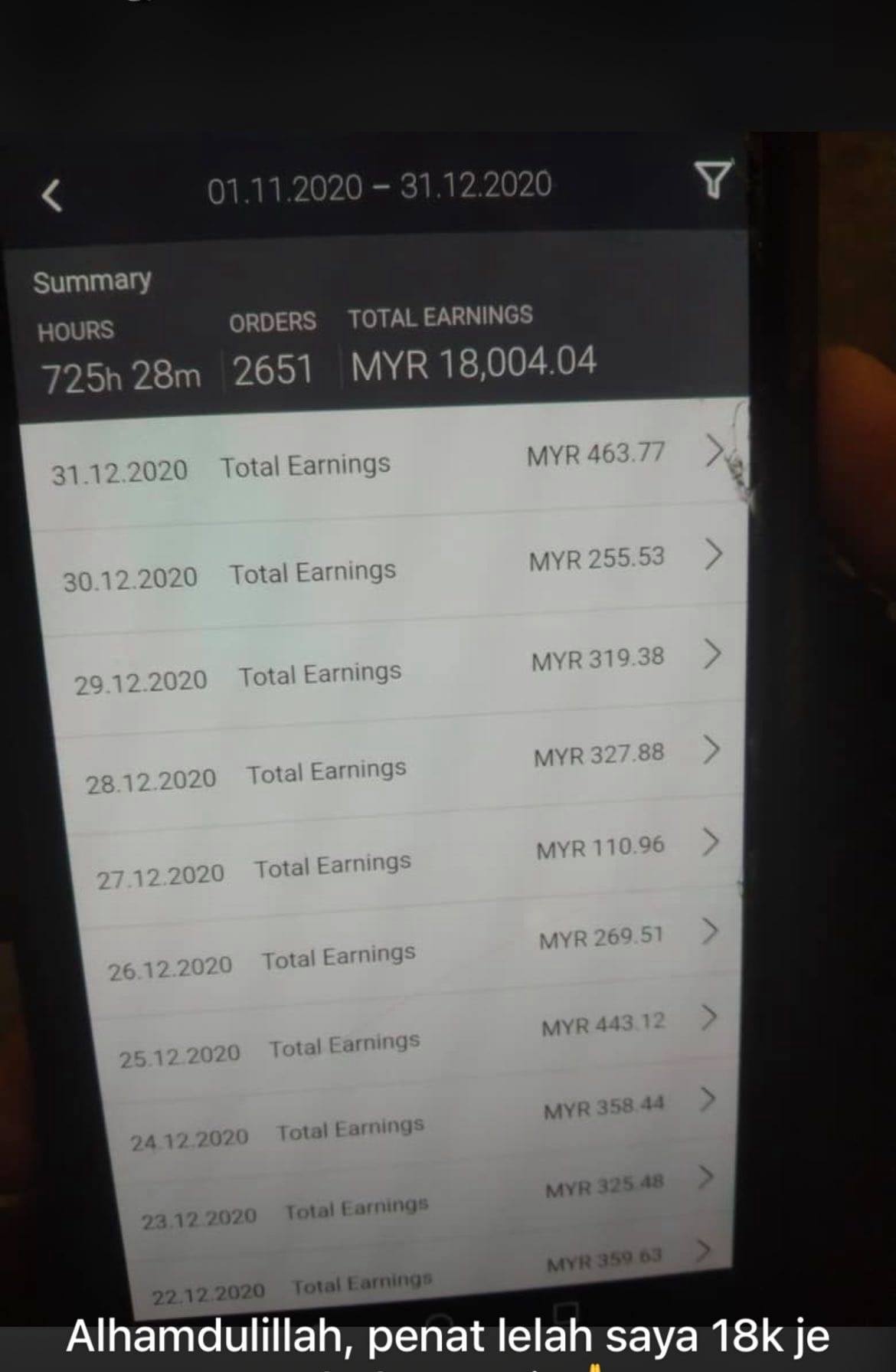 The photo came with a caption that can be translated from Malay to English as: “It’s not easy to earn RM18,000”.
Image credit: Safwan Seth

While the numbers look amazing, it’s important to note that the rider clocked in a staggering total of 735 hours and 28 minutes during these 2 months. That’s about 12 hours a day, every single day, even on weekends, and Christmas and New Year’s Eve too.

And if you break down the total number of deliveries he completed – 2,651 deliveries in 61 days – it works out to about 3-4 deliveries per hour. On average, the rider would’ve been paid about RM6.79 per order, coming up to an hourly rate of RM24 as well during these months.

Other riders say it’s not as easy as it seems

Trying to explain just how difficult work must’ve been for the unnamed rider earning over RM18,000 in 2 months, fellow Foodpanda rider Wilsiong Lim made a Facebook post confirming that it was indeed possible to earn such a salary as a delivery rider – but only by working at least 11-12 hours a day.

This meant that there would be little time for a break while working, which is already a common occurrence among food delivery riders rushing to complete orders within regular working hours. 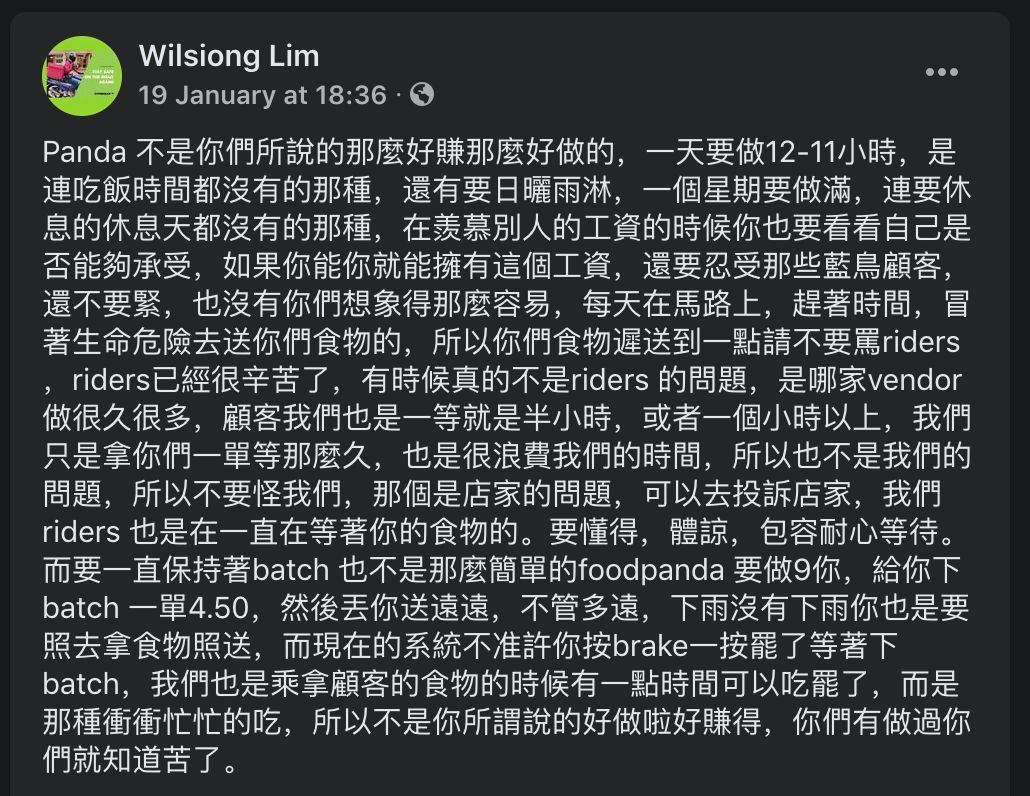 In his lengthy post, Lim further argued that being a Foodpanda rider is not as easy it seems to those who aren’t working in the field. To show just how difficult it is, he shared photos of various injuries from accidents he was involved in while on the job – from scrapes and bruises on his legs and stomach to wounds with stitches on his arm and forehead.

Along with injuries riders are prone to on motorcycles, and the lack of breaks during busy work hours, they also have to work under the sun and rain, and spend hours in a day waiting on restaurant vendors and customers who can be rude and impatient as well. 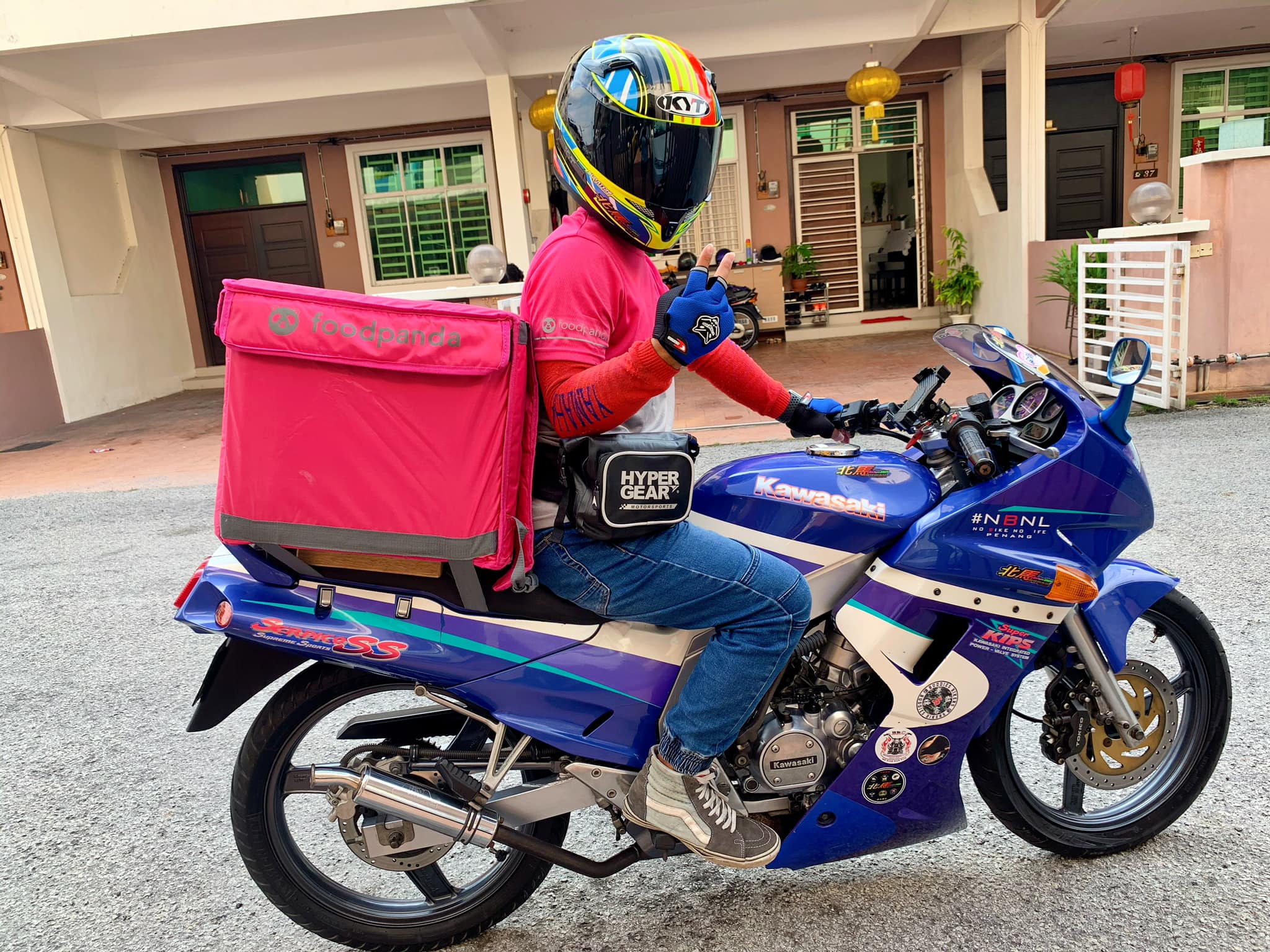 Other netizens have also come out in solidarity to show just how difficult it is to earn such a salary as a Foodpanda delivery rider. In a comment to Lim’s post, netizen Kyle Wen shared: “Those who think that earning RM18K in 2 months like him is easy money should think again. If you haven’t worked a day in your life [as a rider], you might think that it’s easy to earn lots of money being a food delivery rider.”

To further illustrate his point, Wen, who is presumably a delivery rider as well, also added a list of other trials that riders face on the daily. These include being too busy to eat their meals, working over 12 hours a day, and falling sick from various changes in temperature due to stepping in and out of air-conditioned spaces.

We’ve been seeing news of dedicated delivery riders cropping up during the various stages of the MCO – so much so that Malaysians have been taking the time to belanja their riders to free food and leaving out snacks to show their appreciation for them.

This viral photo and story of these Foodpanda delivery riders are more proof of their hard work at this time, and we can’t help but applaud them for their rewarding jobs that aren’t always as easy as many might make it to be.

Keep up with more Malaysian news below: 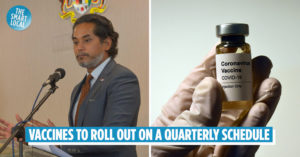 Healthy M'sians Above 18 To Be Vaccinated From Q3 This Year, Vaccine Roll-Out Will Be In Batches
Police Chief & Team Buy Fever Patches & Food For Mum Caught Shoplifting Items For...