Family is important to us Asians, and sharing a meal together with loved ones is often part of our celebrations. But the loss of loved ones is inevitable and difficult, especially when it comes to the elderly who may be left alone with no one to rely on or share their meals with.

Whether the loss is due to passing of loved ones or them walking out of their lives, it leaves them with a void they are unable to overcome and a loss of the sense of purpose.

The story of a man dining alone in a restaurant, but regularly ordering and paying for eight portions of meals, went viral online. A fellow diner who saw him there shared the incident on Facebook, empathising with the elderly man who is said to order the meals for his family – however, their whereabouts are unknown.

He is a regular diner at the restaurant

On 18th March 2022, netizen Zupi Bakhtiar recounted how he had come across the man on his Facebook page in a lengthy post.

He was out at a restaurant for dinner with his family when the man’s behaviour caught his attention. The latter was seen arranging a table packed with food and drinks in a particularly orderly fashion, even neatly placing chairs around the table.

Bakhtiar initially thought that the man was expecting company soon, and had ordered food ahead of their arrival. 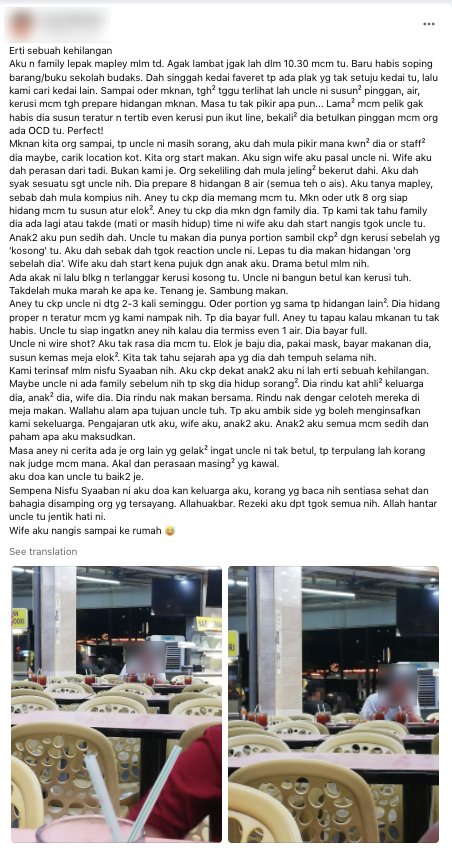 However, as time passed, diners at the restaurant were increasingly baffled by the man’s focused manner over the untouched dishes. Occasionally, he would speak to the empty seat next to him, and silently arranged chairs that other diners accidentally knocked out of place.

“There were eight plates of food and eight drinks, all of which were teh o ais”, Bakhtiar wrote in the Facebook post. “Unable to understand the situation, I asked the waiter if he knew why the man was doing that”.

What the waiter shared with Bakhtiar broke his heart.

The elderly man is a regular diner there, and would order eight portions of meals. It is said that he orders them for his family. However, the waiter did not know if his family are still around or have passed.

“The waiter said that the man was eating with his family. But they are not sure if his family are still around, or have passed”, Bakhtiar wrote in his Facebook post.

But no one would turn up, as whatever food that was left untouched was packed by the waiter to bring home. Nonetheless, the man would sometimes remind the waiters if they had missed out on a portion.

The elderly man is said to behave like a proper customer, even paying for all the food. Sadly, the waiter also mentioned that there have been patrons who openly laughed at him.

Netizens are saddened over the story

Since the story was shared online, Bakhtiar’s post has been shared by Zayan – a local radio station – where it went viral, garnering over 3,000 likes and 1,000 shares at the time of writing.

Netizens have been posting comments, with many asking others to refrain from speculating over the situation without knowing the full story, while others took to empathising with the man.

This netizen, for one, encouraged those who were dining at the restaurant to join the elderly man as it might bring a smile to his face. Graciously, he even offered to pay for all eight meals and to accompany the diner.

Another netizen shared in the comment section that diners should empathise with the man and that we should leave him alone, writing, “If he isn’t disturbing anyone, please let him be. Give him time to come to terms with whatever that he is facing. We may not truly understand what the man is going through, but we can try to look from his perspective, at the very least”.

No timetable or correct way to grief

Whether the loss of a loved one is due to a tragic passing or sad parting, the grief can be unbearable. But one thing is for certain – there is no timetable or correct way to grief, and we should refrain from passing judgement, and try to acknowledge, understand and empathise instead.

Cover image adapted from: Facebook and (for illustration purposes only) Suphon 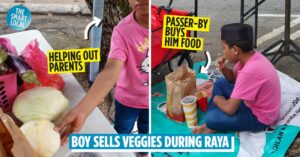 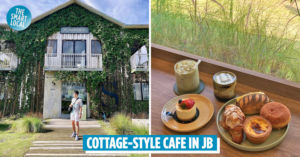